When we decided to create this blog back in 2012 before our big RTW trip I imagined it would be a way for us to share all the details of our travels in ways that most of the time would be exciting and fun, but with the occasional post discussing the hardships of our time on the road. Now that I look back and read through our old entries I see that the majority of our posts were filled with just the happy parts and highlighted what we loved most about the places we visited. If anything I would say the most unhappy thing ever written about was when we announced we were finished with our trip 🙂

Maybe this shows our optimism (a glass half full approach to life), or perhaps it is just that as world travelers we learned that even though there are definitely rough times, we would so much rather share our joys.

As a result of this blogging reputation I have been avoiding writing this particular blog post. As you may have read in our last two posts we happily (again with the happy) announced we had a major life changing event ahead. A baby due in September! Dustin and I had fun on our babymoon to Oregon and we were really starting to feel more comfortable with the idea that “Holy crap, we are going to become parents!!”

We celebrated our halfway point in our pregnancy while on our vacation and had delayed our big 20 week ultrasound by one additional week. As a first time expecting couple, the 20 week ultrasound is often referred to as the “gender reveal” ultrasound. Being first timers ourselves, that is all that consumed our minds…Would we be having a BOY or a GIRL? If it is a Girl, Oh NO- we don’t have a name picked out yet!! All trivial matters in the grand scheme of things.

As I look back now to the night before we went in for our big appointment I recall mentioning to Dustin that besides finding out the sex of the baby, perhaps we should be worried that everything is healthy. That conversation ended quickly when we reminded each other that everything had been fine so far and being past the halfway point surely meant you were in the safe zone. When we first announced we were pregnant we were inundated with the same question which was of course, “do you want a boy or girl?”. At first we would make jokes about this, such as “Well if it is a girl, she better be a tomboy and like hiking like us” or “If it is a boy, that kid better like bicycling as much as his daddy does”. But all joking aside we realized that truly all we really wanted was a healthy baby. Oh how that is all we wanted…

We arrived to our appointment on a Friday morning and I had specifically scheduled and waited for this particular day because we wanted the Sonographer, Emily, to be the one to scan our baby. She had done our 12 week scan and we had really had a great time with her. Little did we know at the time, but Emily had previously worked at a Maternal Fetal Medicine Clinic and had years of experience working with high risk pregnancies. The ultrasound started out fun and I know both Dustin and I were so nervous/excited to find out what we were having! Everything seemed to be going smoothly and eventually Dustin was able to make his educated guess based on what we were seeing that we were having a Baby GIRL…and what do ya know, he was right! Soon after this revelation, I noticed that Emily became quiet and less talkative. We finished up the ultrasound and went to the waiting room to wait for our appointment with the Doctor. As we sat there Dustin was sending out our little riddle to our family to help them figure out the news. We were just another happy pregnant couple waiting to be called back by the nurse. Dustin kept asking me if I was upset it was a girl and not a boy, because I seemed distracted and not that enthusiastic. Perhaps it was motherly instinct or just a woman’s intuition but I felt very uneasy.

We waited quite awhile and finally went back for our appointment. Life would change forever for us as expectant parents that morning. The blissfully happy couple expecting a baby girl would enter that exam room and a heartbroken couple with shattered dreams for a healthy baby would exit.

That day we learned from our Doctor that our baby was not healthy. Over the course of the next couple of weeks we would learn more than we ever wanted. We would learn the pain of loss, the loss of our sweet baby girl. We would learn just how sick she was. We would learn that unlike her heartbroken parents, her actual heart was literally broken and had never developed correctly. We also would learn she had other organ issues and that all of this was a direct result of a chromosomal deletion syndrome which had occurred at conception. It was nothing we could have prevented, it was not our fault. It was a fluke. A one in a million chance. God, Why US???

Being the amazing husband he is and again having the glass half full approach, Dustin brought up the fact that if God has to deal out bad outcomes like this then He chose us because He knows we are the strongest couple and we will make it through this tragedy together. I love my husband.

“Although the world is full of suffering, it is full also of the overcoming of it.” ~ Helen Keller

It has been over a month now since we lost our baby girl. It has been a time for tears but also a time for healing and support from family and friends. As one of my best friends said  “Time will be the only thing that lessens the pang of hurt”…of course my reply to her was “I know time heals but can I please fast forward??”

None of us know what the future holds but one thing is certain. We will always miss our baby girl, whom we named Grace. We know she is in a better place and where she is there is no suffering.

We love you, Grace Sue Orrick 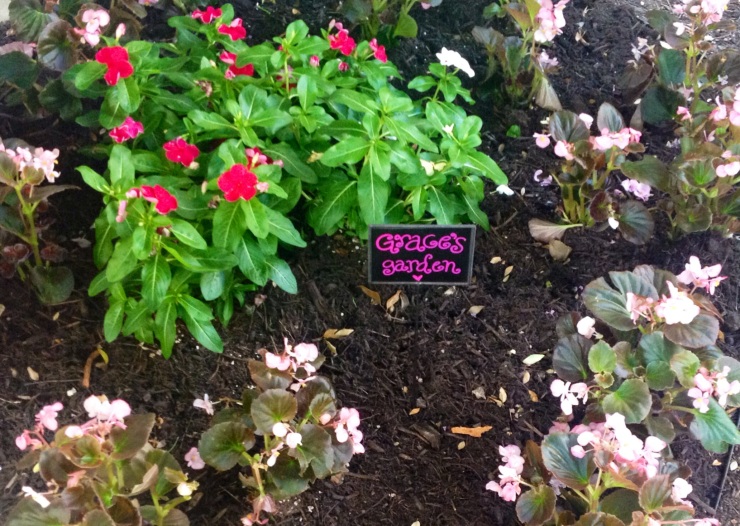 14 thoughts on “Glass Full of Sadness”